THE TERROR OF A TOY 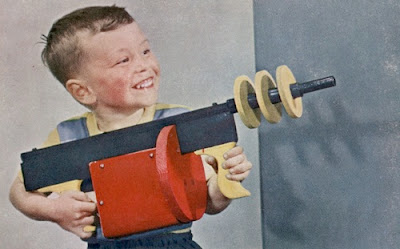 IT would be too high and hopeful a compliment to say that the world is becoming absolutely babyish. For its chief weak-mindedness is an inability to appreciate the intelligence of babies. On every side we hear whispers and warnings that would have appeared half-witted to the Wise Men of Gotham. Only this Christmas I was told in a toy-shop that not so many bows and arrows were being made for little boys; because they were considered dangerous. It might in some circumstances be dangerous to have a little bow. It is always dangerous to have a little boy. But no other society, claiming to be sane, would have dreamed of supposing that you could abolish all bows unless you could abolish all boys. With the merits of the latter reform I will not deal here. There is a great deal to be said for such a course; and perhaps we shall soon have an opportunity of considering it. For the modern mind seems quite incapable of distinguishing between the means and the end, between the organ and the disease, between the use and the abuse; and would doubtless break the boy along with the bow, as it empties out the baby with the bath.

But let us, by way of a little study in this mournful state of things, consider this case of the dangerous toy. Now the first and most self-evident truth is that, of all the things a child sees and touches, the most dangerous toy is about the least dangerous thing. There is hardly a single domestic utensil that is not much more dangerous than a little bow and arrow. He can burn himself in the fire, he can boil himself in the bath, he can cut his throat with the carving-knife, he can scald himself with the kettle, he can choke himself with anything small enough, he can break his neck off anything high enough. He moves all day long amid a murderous machinery, as capable of killing and maiming as the wheels of the most frightful factory. He plays all day in a house fitted up with engines of torture like the Spanish Inquisition. And while he thus dances in the shadow of death, he is to be saved from all the perils of possessing a piece of string, tied to a bent bough or twig. When he is a little boy it generally takes him some time even to learn how to hold the bow. When he does hold it, he is delighted if the arrow flutters for a few yards like a feather or an autumn leaf. But even if he grows a little older and more skillful, and has yet not learned to despise arrows in favour of aeroplanes, the amount of damage he could conceivably do with his little arrows would be about one hundredth part of the damage that he could always in any case have done by simply picking up a stone in the garden.

Now you do not keep a little boy from throwing stones by preventing him from ever seeing stones. You do not do it by locking up all the stones in the Geological Museum, and only issuing tickets of admission to adults. You do not do it by trying to pick up all the pebbles on the beach, for fear he should practice throwing them into the sea. You do not even adopt so obvious and even pressing a social reform as forbidding roads to be made of anything but asphalt, or directing that all gardens shall be made on clay and none on gravel. You neglect all these great opportunities opening before you; you neglect all these inspiring vistas of social science and enlightenment. When you want to prevent a child from throwing stones, you fall back on the stalest and most sentimental and even most superstitious methods. You do it by trying to preserve some reasonable authority and influence over the child. You trust to your private relation with the boy, and not to your public relation with the stone. And what is true of the natural missile is just as true, of course, of the artificial missile; especially as it is a very much more ineffectual and therefore innocuous missile. A man could be really killed, like St. Stephen, with the stones in the road. I doubt if he could be really killed, like St. Sebastian, with the arrows in the toyshop. But anyhow the very plain principle is the same. If you can teach a child not to throw a stone, you can teach him when to shoot an arrow; if you cannot teach him anything, he will always have something to throw. If he can be persuaded not to smash the Archdeacon's hat with a heavy flint, it will probably be possible to dissuade him from transfixing that head-dress with a toy arrow. If his training deters him from heaving half a brick at the postman, it will probably also warn him against constantly loosening shafts of death against the policeman. But the notion that the child depends upon particular implements, labeled dangerous, in order to be a danger to himself and other people, is a notion so nonsensical that it is hard to see how any human mind can entertain it for a moment. The truth is that all sorts of faddism, both official and theoretical, have broken down the natural authority of the domestic institution, especially among the poor; and the faddists are now casting about desperately for a substitute for the thing they have themselves destroyed. The normal thing is for the parents to prevent a boy from doing more than a reasonable amount of damage with his bow and arrow; and for the rest, to leave him to a reasonable enjoyment of them. Officialism cannot thus follow the life of the individual boy, as can the individual guardian. You cannot appoint a particular policeman for each boy, to pursue him when he climbs trees or falls into ponds. So the modern spirit has descended to the indescribable mental degradation of trying to abolish the abuse of things by abolishing the things themselves; which is as if it were to abolish ponds or abolish trees. Perhaps it will have a try at that before long. Thus we have all heard of savages who try a tomahawk for murder, or burn a wooden club for the damage it has done to society. To such intellectual levels may the world return.
There are indeed yet lower levels. There is a story from America about a little boy who gave up his toy cannon to assist the disarmament of the world. I do not know if it is true, but on the whole I prefer to think so; for it is perhaps more tolerable to imagine one small monster who could do such a thing than many more mature monsters who could invent or admire it. There were some doubtless who neither invented nor admired. It is one of the peculiarities of the Americans that they combine a power of producing what they satirize as "sob-stuff" with a parallel power of satirizing it. And of the two American tall stories, it is sometimes hard to say which is the story and which the satire. But it seems clear that some people did really repeat this story in a reverential spirit. And it marks, as I have said, another stage of cerebral decay. You can (with luck) break a window with a toy arrow; but you can hardly bombard a town with a toy gun. If people object to the mere model of a cannon, they must equally object to the picture of a cannon, and so to every picture in the world that depicts a sword or a spear. There would be a splendid clearance of all the great art-galleries of the world. But it would be nothing to the destruction of all the great libraries of the world, if we logically extended the principle to all the literary masterpieces that admit the glory of arms. When this progress had gone on for a century or two, it might begin to dawn on people that there was something wrong with their moral principle. What is wrong with their moral principle is that it is immoral. Arms, like every other adventure or art of man, have two sides according as they are invoked for the infliction or the defiance of wrong. They have also an element of real poetry and an element of realistic and therefore repulsive prose. The child's symbolic sword and bow are simply the poetry without the prose; the good without the evil. The toy sword is the abstraction and emanation of the heroic, apart from all its horrible accidents. It is the soul of the sword that will never be stained with blood.